Chapter XII Traditional love
‘The only thing I can tell you is this: go beyond your senses, follow your heart ‘.
The voice of the spirits gave me an imperative and now I am following it. My heart told me to meet a twenty-six-year-old Russian girl crossed on tinder. And now I’m driving through the island of Napoleon to pick her up in Marciana Marina and take her to have dinner up at the Pisan fortress. As soon as she appears she slaps me with her Russian gaze, as intriguing as a white night in St. Petersburg and softly sweet as a painting by Botticelli hidden under the daub of a painter of Soviet socialist realism.
‘Hello I am Maria’.
Like every tinder’s match, the initial embarrassment had to be overcome, and it got away after the first two laughs. When we arrived at the top of the hill and we passed Poggio, the ascent to the hermitage of San Cerbone opened on our left. ‘Do you want to take a walk in nature?’ I asked her. And she accepted willingly. As we went up to that pleasant place surrounded by chestnut trees and by the rumble of mouflons we talked about Putin and Gianluca Vacchi, about Orthodoxy and Pope Francis, about banks and saints. Then she stopped and smiled at me. I could not help kissing her, discovering the sweetness of her childish lips. And while we were entwined in a mixture of unexpected affection and growing desire she struck me with a question made in an almost resigned tone:
‘Do you believe there can be a traditional love in this modern world?’
I looked at her a bit lost, and not finding a ready answer she detached from me and took two steps back to get away. And as she walked away I saw her turning into a nightingale. Flying away among her chirps she left me alone in the woods with that terrible question. Can traditional love exist in this modern world? 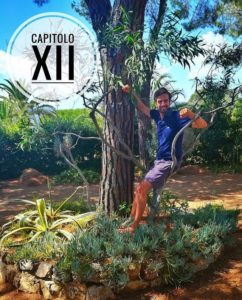