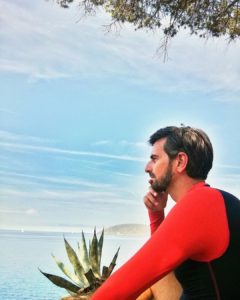 Chapter II – in Porto Azzurro
I looked for that little creature far and wide throughout the Garden of the Simples. But I did not find a living soul. I was returning to the car when a strange sound emerged from some bushes at the side of the path. It seemed like words but they were said in a unique way, like a tangle of herbs and branches that were played by the wind of the Tyrrhenian Sea. I got closer and I heart like a whisper that caressed my ears: ‘save it’. I stopped, my head beginning to reproach myself for hallucinations, and I clearly felt it again: ‘save it’. Then suddenly the wind stopped and I was alone with myself and my doubt to have hallucinations. Returning to Porto Azzurro full of thoughts in my head I noticed a small busted blue car behind me. I do not know why but I had a strange feeling. So at the first straight road I slowed down and instead of overtaking me the car slowed down and stayed behind. I stopped suspiciously at the side of the road and the car finally overtook me. And I saw who was driving it. My eyes were caught in a man’s face, that was so full or malice that he seemed puked up there from the depths of hell. ‘He is probably just an angry driver’ I thought. But I did not believe myself. Also because soon after having resumed the march I found him again on my heels. He had stopped in a side street and had begun to follow me again. I arrived in Capoliveri and he was still behind me. I went down to Morcone and hewas still there. I turned to Madonna delle Grazie and I stopped near by the church. He did not turn elsewhere, he just stopped. And he kept staring at me from the car. I got out of the car and hid in a path that runs along the sea. And there I threw my eyes and my soul looking for answers. Who the hell was he? And above all, who should I save and why?