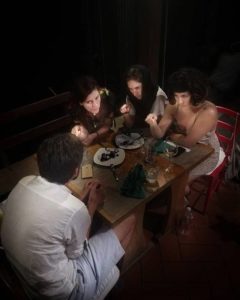 Chapter III – On the mount Capanne

Walking through a promontory I met a beautiful girl. I smiled. She smiled. ‘Hola’ she told me. ‘Hola, I replied. And a dialogue began. She was Mexican, studied acting in New York and ended up on Elba by chance. She was on the island with two Chilean friends, also actresses. ‘Have you already been to Marciana?’ I asked. She shook her head. ‘If you want I’ll take there you tomorrow night to see the sunset and eat a ‘schiaccina’ ‘, I tried. She smiled, saying ‘let’s see’. I gave her my phone number, as usual, knowing she would not call. And I saw her going, sinuous as only an actress can be. The day after, I found a message from her: ‘Is the invitation for tonight still valid? Can I bring my friends? “. I’m picked them up and I found her in her car with two sensual and breezy Chilean girls. I wanted to kiss them all watching the sunset, instead I took them to Marciana in a restaurant overlooking Mount Capanne. We sat down and started eating. In that calm atmosphere, while the three girls were talking about globalization and religion, I realized that one of them was changing expression. Her deep, luminous black eyes were assuming the colors of the night and were filling with a strange inhuman rage. I was about to say ”hey that happens’ when I was kept stuck by the eyes of the other two, that became pungent like sea urchins. Suddenly everything around me turned into deep darkness and only those faces remained, bad and angry as demons. Their voices disappeared and a single, spectral one appeared, coming out from all three of their mouths simultaneously: ‘Why don’t you listen? You must save it. Did you understand? You must save it! ‘ I felt myself crushed by a superhuman fear. But I did not have time to find an answer that the light around us came back and their voices resumed ringing on their Latin smiles. ‘What’s that face?’ one of the Chileans asked me, seeing me terrified. I wanted to give an answer but I found myself lost in the labyrinth of my mind.