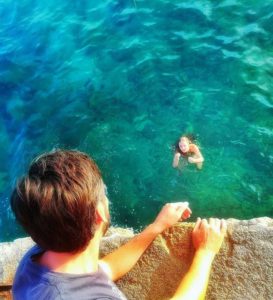 Pretending. I did the only thing I could do with those girls who had just opened a window on hell. The evening continued with their Latin smiles that crashed on the rocks of my pretense. But as soon as I brought them home, my brain began to grind thoughts like a crazy mill. The next day I went to the pier of Capoliveri, a small beach where families go on vacation. I took refuge on the top of the pier, about three meters high and fifty miles away from the beach, and I let the thoughts flow in solitude. In the last days I found myself in front of a strange child with goat’s feet, secret voices of nature, an ogre chasing me, three girls who turned into demons. ‘I have hallucinations, I’m going crazy’ I thought worried. I was already thinking about which psychiatrist to call when I noticed a blonde tiny girl in the middle of the beach. She was too young to attract my man’s eyes, yet I could not detach them from her. She had something supernatural. She dived into the sea and swam quickly in my direction. She swam under water and came out right at the end of the pier just below me. And like a symphonic sketch of Debussy her voice reached very sweet my ears: ‘You’re not crazy. You only have the courage to look what others do not want to see ‘. Then she went back down water and disappeared in the sea, like an aquatic angel who just fulfilled her duty. I’m almost getting used to it. And if reality were really this?