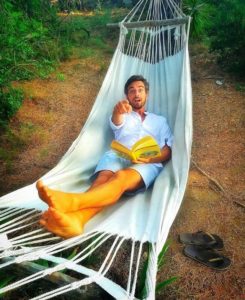 Chapter V – On the hammock

‘You’re not crazy. You only have the courage to look what others do not want to see ‘. The words of that girl got planted deeply in my mind. That has not stopped working. I left the beach and in the hard sunny walk that leaving the pier leads to Capoliveri I saw it again. That creature of the underworld that had followed me few days before hid in a bush of myrtle in the middle of the Mediterranean scrub and stared at me again with those eyes full of malice. This time he looked bare-chested, his body covered everywhere by hair. I wanted to speak to him, but I did not find the courage and instead I accelerated my pace. He did not seem to have followed me, as if by his presence he only wanted to say: ‘Be careful, I am looking at you’. I returned home and I stretched out on the hammock in the garden amid the smells of the Mediterranean scrub to abandon myself to my thoughts, reading a book. And a question emerged before my eyes: who is really crazy? Me, because I use the eyes to see these spirits or those who use them to blow up candy crush’s candy all day? I could have found an answer to that question but I heard a noise in the garden hedge. And suddenly, in front of my eyes, that kid with goat legs appeared very clearly. I jumped on the hammock. But taking a more accurate look I noticed that he had the whole body covered with scratches and wounds and on his sweet face there was a swollen eye. ‘Hey, what happened to you?’ I asked worriedly. ‘You have to hurry’, he replied in an angelic voice, but with pain, ‘I came here to tell you: there is not much time left. Go and save it’. ‘Whom?’ I asked almost desperately. ‘I do not need to tell you. You know. And now words are enough. We need facts’. And I found myself laying in the hammock, looking into the eyes of a kind of satyr wounded in his entire body. Should I really start to take the thing seriously?