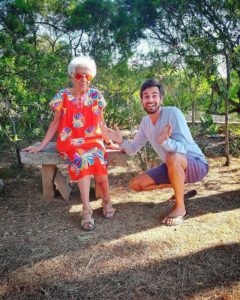 ‘Monserrato’. That word, that I discovered in the secrets of the sea, was planted in my mind. I was thinking i would have to go to Sardinia in the city of Monserrato, or even to Barcelona to the Monserrat monastery. But a quick search on the smartphone was enough to find out that there is a small abandoned monastery on Elba island, near Porto Azzurro, which is called Monserrato. I went by car and arrived at the bottom of the mountain on which this place of the spirit is set. All around me there was a wild nature that brings together the flavors of the Mediterranean sea, with its vegetation, with the mountain’s altitude, with its wild goats that bleated like gloomy omens. I walked along the steep, abandoned pathway for a while, as if I had someone’s eyes on me, until I got to the top. One senses that here there must have been a small community of monks in ancient times but now there is only the memory of time and the nature that struggles to resume its spaces. I entered the dim light of the front porch and just beyond, sitting under the shade of the trees, I saw her. That figure that had appeared so clearly to me while I was drowning in the deep sea. I immediately recognized that face on which the memory of history was carved. She looked at me, smiled at me, and with a voice that came from the depths of time, she told me: ‘You finally arrived. I was waiting for you’.